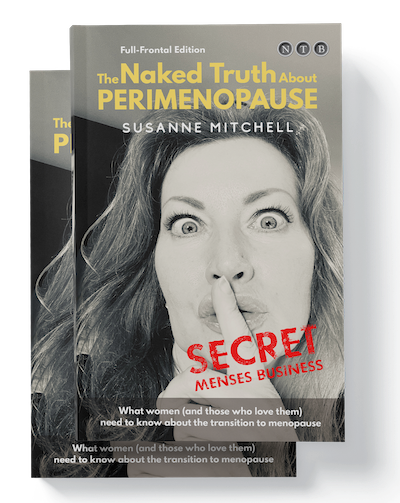 Digital Book in PDF format for reading on any device. AUD $19.95 other currencies convert at checkout.

In the book I’ll give you the truth behind the transition to menopause and what to expect through the hormonal chaos. You’ll find out about treatment options including some controversial therapies, plus how to get what you need from your doctor.

Has your doctor told you to take more exercise, reduce stress, go on a date night or take anti-depressants when you’ve gone to them with symptoms like these?

The good news is, you’re not alone. But the bad news is that women around the globe are struggling to get taken seriously in the 2-10 years prior to their menopause. This time is called perimenopause, which can hit from your mid to late-30s and on and cause devastating consequences.

‘Susanne has done the hard yards… to create an accessible and informative book that will take a lot of the stress out of peri and post menopause.

Years of academic research from experts has been combined with her creative flair for writing and expressing concepts in an approachable and knowledgeable way. This along with with personal experience has produced a manual of profound importance, imbued with her light and friendly touch.’

‘Loved reading this book. So informative and funny which I didn’t expect. It’s a must read for every woman (and those who love them, men included!). It covers all aspects along with her clever humour and the knowledge and insight will empower women to manage their menopause and take control of their health through midlife.’

When we don’t get the help we need, it can affect our jobs, our mental health, our families, our relationships, our sex-lives and our general wellbeing.

Through my 40s I kept going to the doctor with symptoms and was offered treatment for depression, drugs to treat other symptoms, but not offered any help to treat the underlying cause which was hormone deficiency.

And I didn’t know anything about perimenopause and so was utterly unprepared to challenge their advice. I figured menopause would happen through my 50s and didn’t understand that the real villain creates all the havoc in the decade prior.

That’s why I wrote this book. The Naked Truth About PERIMENOPAUSE, because I wish I’d had all this valuable information at my fingertips back then!” I’m Susanne Mitchell, and I’m a writer on a mission to report the truth.

WHAT YOU WILL LEARN

Once you’ve read the book, you’ll understand all you need to know about your perimenopausal transition so that you can get the help that’s right for you. The Naked Truth About PERIMENOPAUSE will show you how to be prepared and empowered enough to stand your ground, balance your body and embrace your post-reproductive years.

Back then, I was on the floor with perimenopausal symptoms, I lost my confidence, I lost my physical fitness, my energy, I lost my sense of self and I almost lost my relationship towards the end, because I honestly thought I had some kind of dementia, my cognitive function was that bad. And when the hot flushes kicked in I finally understood what was going on.

So I researched and I fought and I questioned and I battled to get the right treatments to bring me back to sanity and find my power again. I thought all was lost and life could never be the same again. But I found a way through and that’s why I wrote this book, The Naked Truth About PERIMENOPAUSE, because I couldn’t keep what I’d discovered to myself.

‘Susanne has creatively filled in some much needed ‘blanks’ in the quest of understanding perimenopause. Her authentic first hand experience, dotted with humour, combined with good research and medical facts, has been presented as a clear, easy to navigate, guide.

As a woman who started early menopause or perimenopause, depending on which doctor I visited, at the age of 37, 14 years ago, I encourage you to read this book, even if it’s not because you suffer any symptoms yourself, but to help others. I hope this book will be passed on to enlighten a new generation and help dispel the myths and old wives tales! Knowledge on this subject gives us the power to be more comfortable within ourselves.‘

WHO SHOULD READ IT

All women (and those who love them) need to know the facts. In my book you’ll get: an understanding of your sex hormones including testosterone, which is so vital for women that I dedicate an entire chapter to it.

Plus we look at thyroid and I’ll share my experience honestly with you and reveal the controversy behind HRT, differences of medical opinion, and why bioidentical hormones differ to synthetic. I’ll discuss why compounded pharmaceuticals are important, plus non-hormone treatments and natural therapies. Plus I share information on general health and wellbeing plus how to find the right medical help.

You need this book. And I had to tell you about this because you all deserve the right to take back control of your menopause and your lives.

I spent 9 months of self-funded writing and research, interviewing professors, thought leaders, hormone specialists, naturopaths and doctors, wading through evidence and academic papers so I could write this book for you.

I couldn’t keep it to myself, I felt obligated to share this information with women everywhere and you’ll be glad you read it because it will prepare you to understand what’s going on and get the help that works for you.

So to make your life a whole lot easier, all you need to do is read my book, The Naked Truth About PERIMENOPAUSE and you can discover, in under 2 hours, what it took me more than 10 years to work out.

Get Your Copy now

TAKE A LOOK INSIDE 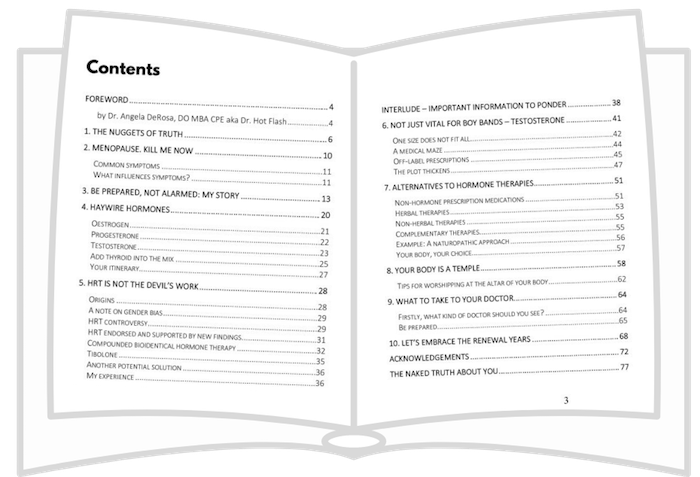 As a respected, internationally recognised authority on women’s hormonal health, Dr. DeRosa understands the range of health issues women face leading up to and during menopause. She is on a mission to educate women and help them live their happiest lives as they grow and change.

“In The Naked Truth about PERIMENOPAUSE, Susanne Mitchell takes an eye-opening look at this serious topic, her endearing sense of humor reading like an honest conversation with a well-informed girlfriend, while providing thought-provoking information and common sense advice. Susanne also offers context to ‘conventional medical thinking’, how to better approach potential ‘conflicts of interest’ in medicine and the very real gender biases we face in the treatment of women’s hormonal health.

I have found a kindred spirit in Susanne, as she provides women with much-needed information and coping strategies. I laughed, I cried, and I peed my pants a little when I read this book! I also got enraged once again, reading her struggle to understand and fight to access all the things that prevent women from getting the proper care and hormones they need. Men get their penis drugs and all the testosterone they require; we get psych meds and excuses.”

Susanne Mitchell is an author, media professional and self-professed kitchen sink philosopher. She is interested in the human condition and seeking the truth, a pursuit that heavily influences her work.

Susanne has 30 years of experience working with broadcasters, including the BBC Disney, ABC Australia and NBC America on feature films, documentaries and television drama.

Daughter-in-law to the late Warren Mitchell, a British actor best known for playing Alf Garnet in Til Death do Us Part, she admits he played an important role through her 20s and 30s. Encouraging Susanne to expand her understanding of the world, Warren challenged her to have the courage of her convictions and to seek the truth, a pursuit that heavily influences her work.

Her next book, The Naked Truth About YOU, Unlock the Secret to a Kick Arse Life, will be released in late 2021. It’s a refreshing and compelling look at today’s hottest self-development topics that weaves a potent thread of philosophy, psychology, and neuroscience through an engaging narrative of true stories.

Using her own life experiences and living with type 1 diabetes, Susanne is an ordinary, insulin pump-wearing woman on a quest to improve who we are and how we choose to live. This mother of two young adults currently resides in Sydney with her partner Nick, son Rowan, two Burmese cat-dogs and a rescue hound called Crumpet. 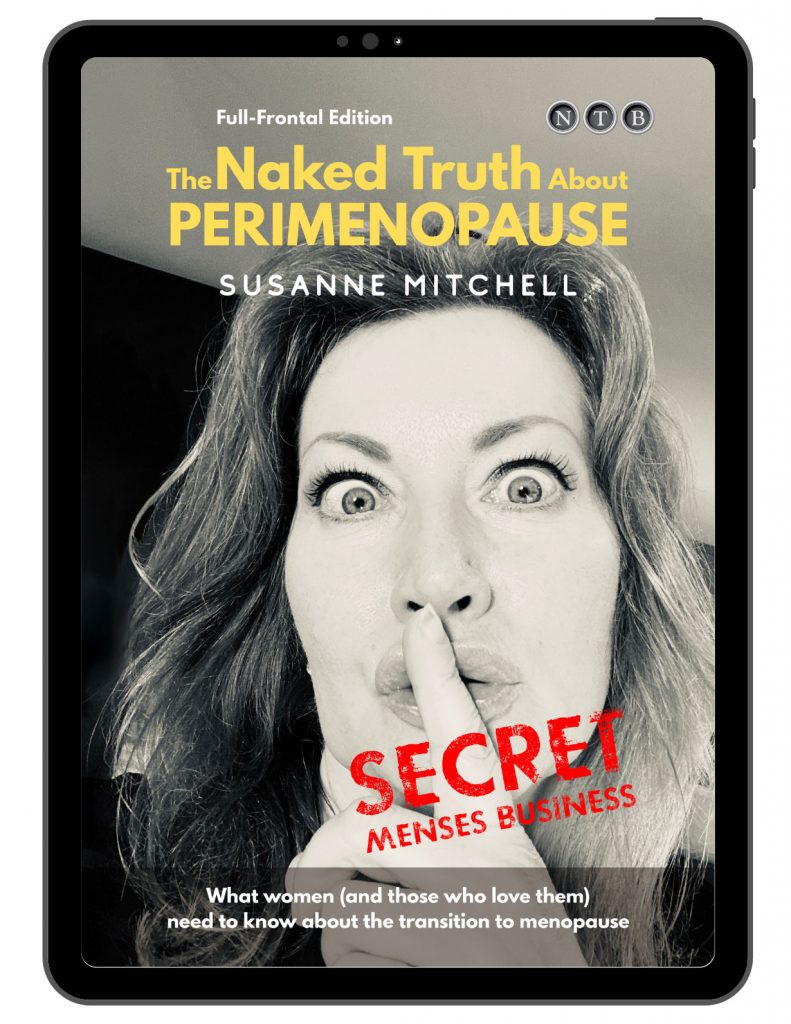 Digital Book in PDF format for reading on any device. AUD $19.95 other currencies convert at checkout.

Come join me in my Facebook group, Secret Menses Business, to stay up to date with information and new research. It’s a place for women to share their experience, wisdom, strength and inspiration.

You can become a part of a growing movement of women who challenge outdated conventional medical thinking and find ways to live a kick-arse life.

I look forward to getting to know you in the group. Let’s go!

If you loved the book and want to share it with others then you can become an affiliate and earn yourself a commission.

You’ll get 20% of every sale you make and help other women in the process. Together we can be advocates for change and embrace our renewal years.

Join the affiliate program, it’s FREE and easy to set up.

‘This book was such an eye opener! I’m so glad I read it now (I’m almost 44) before completely losing myself on the journey through perimenopause. Now I feel prepared with the knowledge to navigate my way through with an idea of where it might lead me.

Susanne shares an honest account of how her life changed during perimenopause, with some quirky stories making the book an easy read and I laughed out loud at times. She’s done the research for us and shares her findings on options available (and sometimes not so available) to us.

Interesting to learn about testosterone, I think we can fairly claim some ownership of that hormone! I highly recommend this book for women and those around them that may not understand what is happening to their loved one.’ 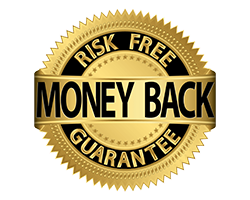