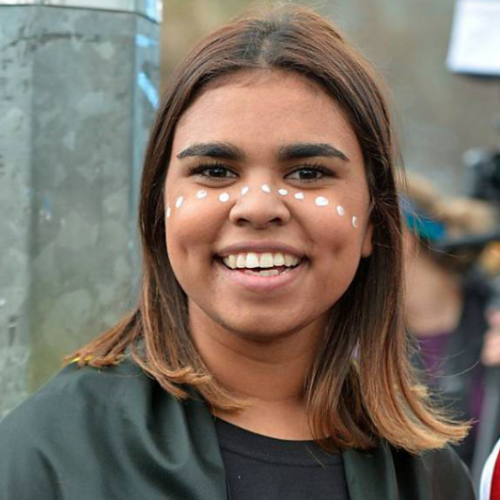 Aboriginal and Torres Strait Islander women from across Australia can now apply to participate in a week-long summit in Canberra to build their political engagement skills to make positive changes in their communities.

Part of Oxfam Australia’s Straight Talk program – which is now in its 12th year – the national summit will run from 17-22 October. The immersive program aims to empower Aboriginal and Torres Strait Islander women to learn more about, and participate in, the political system.

Over 10 years, the program has empowered more than 850 First Nations women, by connecting them with Australia’s political system while building their capacity as changemakers.

We are looking for Aboriginal and Torres Strait Islander women who represent the strength and diversity of their communities.

“The success of the program lies in its ability to effectively advocate for the participation of First Nations women in politics, and this is demonstrated in how well-respected the program is among Aboriginal and Torres Strait Islander communities and political networks around the country,” Ms Williams said.

“Our previous participants include the first female Mayor of the Torres Shire Council, Vonda Malone, local WA councillors Rae Cottom and Brooke O’Donnell, as well as trailblazers such as Karen Diver, Member for Cook Cynthia Lui, and former Senator and Olympian Nova Peris.”

Rockingham Councillor and Wangkatha woman Rae Cottam said her trip to Canberra with the program in 2015 was transformative.

“I got involved in the Straight Talk program because I’d seen women do it all over the country. I’d heard about how amazing it was. I heard women go and come back to our communities and transform themselves and the work that they do. And I thought: ‘I want to get on board with this’,” Ms Cottam said.

“It blew my mind, absolutely… just to know what’s happening at Capitol Hill. You know, we see it on the news, but to see what’s actually going on there.”

Councillor for Kalamunda, Palyku woman Brooke O’Donnell said the program is important for First Nations women to have a voice.

“It’s really important because, in particular, from I guess a lot of our mob’s communities, the women are as much the spokespeople and the strong networks and links to that community and quite often, we – from a Western society – always think about the role as a caregiver and the person that is often behind the scenes and is often seen, and not heard,” Ms O’Donnell said.

“I think for me, recognising that Aboriginal women really need to be standing up and taking that role and celebrating the achievements that we have made and actually being able to bring each other up, rather than being behind the scenes, I think it’s important to take those opportunities when you’re offered them. I’ve always been a big believer of that because whenever I’m offered an opportunity, I can’t say no, I have to say yes, because who knows what will come from that. The opportunities are endless.”

Applications are now open online via this link until 17 July. Applicants do not need previous political experience or an understanding of Parliament.

Ms Williams encouraged Aboriginal and Torres Strait Islander women from all parts of Australia to apply.

“We are looking for Aboriginal and Torres Strait Islander women who represent the strength and diversity of their communities. We would love to have participants from all regions of Australia, of all ages, backgrounds and education and employment levels,” Ms Williams said.

I’m passionate about opening honest and authentic conversations – the kind that offer us all the opportunity to take ownership of our personal progress to lead an authentic and truly kick-arse life.  If you’re a woman (or identify as one) then join our Facebook group, Secret Menses Business where we share experience, strength and hope in all areas of our lives. Or follow my Facebook Page, Instagram or find out more about my books here.